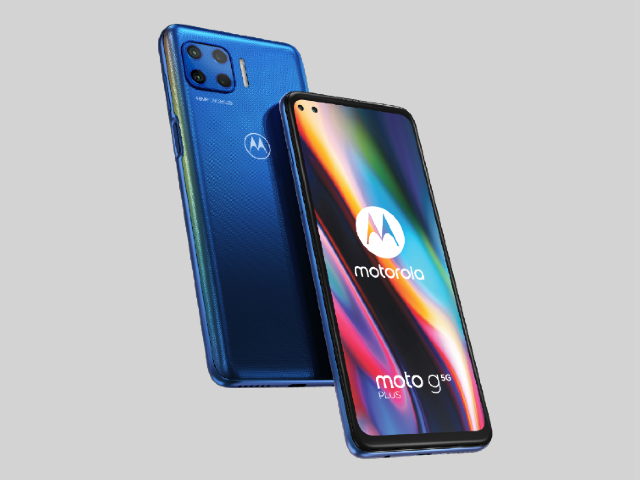 Update: MVNO giffgaff has also confirmed it is offering the Moto G 5G Plus from July 20. Customers can buy it outright from £299 or for a monthly price of £13.60 over 24 months.

As with all giffgaff devices, new customers will need to purchase a goodybag of £10 or more.

Original: Motorola has announced the launch of its second 5G smartphone in the UK with the Moto G 5G Plus.

It runs on the Qualcomm Snapdragon 765 chipset, with a 5,000mAh battery and 20W TurboPower charging. It has a 6.7-inch full HD screen with a 90Hz refresh rate.

In the camera department, the Moto G 5G Plus features a quad-camera rear setup and a dual camera front setup. On the back, there is a 48MP main camera, 5MP Macro Vision lens, 8MP ultra-wide lens, and 2MP depth sensor.

The front has a 16MP main camera, with an 8MP ultra-wide lens. The phone also comes with a 3.5mm headphone jack. It also allows for customisable UIs with the My UX feature, giving users custom settings and device themes.

The Moto G Plus 5G is Motorola’s second 5G device in the UK, following the Motorola Edge which launched in May.

“Motorola deserves plaudits for making the £299 Moto G 5G Plus one of the cheapest devices to offer cutting edge connectivity,” he said.

“The quad camera setup goes toe-to-toe with many of its top-end rivals, the 6.7-inch Full HD+ resolution screen looks like something from a more expensive model, and its 90Hz refresh rate punches well above its weight.

“Last year Motorola won acclaim for its reinvention of the innovative – but expensive – Razr flip phone, and it’s great to see the brand now pushing the boundaries at the affordable end of the scale.

“This launch puts 5G within reach of every consumer and shows just how commonplace this technology is going to be within the year.”