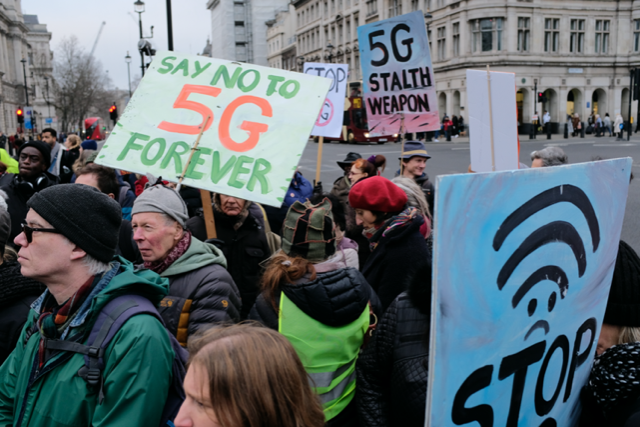 It’s a story that sounds like it has sprung from the pages of an Isaac Asimov best-selling science-fiction epic, or a new Netflix production.

A cult of technocrat billionaires plot to cover the world in a gigantic electronic grid that would utilise artificial intelligence to control the world’s population, each of whom had been impregnated with ‘smart dust’ under the pretence of protecting them against a fictitious disease.

It was certainly a story delivered with passion and certainty by professional conspiracy theorist David Icke in a rambling two and a half hour interview with alternative news channel London Real.

As an ex-sports broadcaster, Icke is a natural in front of the camera. He is articulate, confident, and speaks with an authority born from years of banging his particular drum – which is that the world is controlled by a cult of psychopathic and power-mad billionaires.

Regarded as crank for 30 years (he once maintained the world was controlled by an inter-dimensional race of reptilian beings called the Archons) Icke is still compelling viewing.

But under the current health emergency, his wild stories of evil elites plotting to take over the world took on a more sinister development as some of his more combustible acolytes set fire to at least four mobile phone masts around Liverpool, Manchester and Birmingham. Some of them were not even equipped with 5G transmitters.

The cause of their fury and fear were the internet conspiracists like Icke offering doomsday scenarios connecting 5G with the pandemic. Theories were being bandied about on various YouTube and Vimeo channels and Facebook and internet chat rooms.

One claim that gathered momentum was that coronavirus originated in Wuhan where 5G transmitters had proven fatal to those who lived nearby.

The attacks on the phone masts were also provoked by a video doing the rounds of an unidentified man who described himself as “head of the largest business unit at Vodafone between 2013 and 2015.

He claimed to have worked on IoT and 5G at Vodafone and says he “knew a long time a long time ago that 5G was dangerous as the high frequency of 5G is poisonous to human cells which emit toxins that the body expels and that these toxins are coronavirus.”

The mystery narrator says COVID-19 is “a reaction of the human body to the electrification of the universe through 5G satellites towers and cells in major cities.”

Echoing Icke’s theory he also described the proliferation of 5G and the current pandemic as “the largest global cover-up in history for the impact on humans based on technological advancements”.

To the uninformed he does sound convincing about spectrum matters. But it is unlikely that anyone who had every worked with Huawei (as he claimed) would mis- pronounce it as “highway”.

His theory is that global economies are being shut down to enable a new world order led by Amazon and Google which will manage the supply chain of everything people purchase.

He reiterates Icke’s belief that blockchain digital currency replace conventional money and will only be made available to people who submit to a vaccine which embeds a nano-tracking chip in their body. The entire enterprise, he suggests, is being driven by Bill Gates.

The networks’ response was unequivocal. For the first time Mobile News can recall, EE, O2, Three, and Vodafone jointly issued a statement: “Not only are these claims baseless, they are harmful for the people and businesses that rely on the continuity of our services They have also led to the abuse of our engineers and, in some cases, prevented essential network maintenance taking place.”

“It is deplorable that critical communications infrastructure is being attacked based on outright mistruths.

“We urge everyone to trust health authorities and rest assured communications technology is safe. There is no link between 5G and COVID-19.”

A day later Ofcom warned Uckfield FM, a community radio station after it broadcast a discussion that contained potentially harmful views on the coronavirus.

The studio guest was presented to listeners as a health professional who claimed that the coronavirus outbreak was linked to the rollout of 5G technology, and who also cast doubt over reported symptoms of the virus.

Ofcom said: “Broadcasters have a valuable role to play in informing and updating people about important issues in society, like the coronavirus.

“During the current pandemic, It is important that potentially misleading information about the coronavirus is not broadcast on radio or TV.

“This includes inaccurate claims about potential causes, symptoms, and treatments for the virus so Ofcom is prioritising broadcasting complaints relating to the coronavirus that could cause harm to audiences.

“These might include health claims related to the virus, medical advice which may be incorrect; and inaccurate or misleading content relating to the virus or to public policy on it.”

Vodafone UK CEO Nick Jeffrey’s was furious with conspiracists, telling his social media followers: “Good to see that YouTube has decided to delete crackpot videos linking 5G for coronavirus. This kind of fake news needs to be rooted out across all social media platforms.

“It beggars belief that some people should want to harm the very networks that are providing essential connectivity to the emergency services, the NHS, and rest of the country during this difficult lockdown period. This is now a matter of national security. Police and counter-terrorism authorities are investigating.

“Online stories connecting the spread of coronavirus to 5G are utterly baseless. Please don’t share them on social media. Fake news can have serious consequences”

The latest controversy over 5G health is not new. In September, 2017, 180 scientists and doctors from 36 countries wrote to the EU calling for a halt to the rollout of 5G claiming:

“5G will substantially increase exposure to radio frequency electromagnetic fields on top of the 2G, 3G,4G, Wifi etc for telecommunications already in pace. RF-EMF has been proven to be harmful for humans and the environment” (see www.5gappeal.eu)

The ICNIRP, an independent organisation, provides scientific advice and guidance on the health and environmental effects of non- ionizing radiation “to protect people and the environment from detrimental NIR exposure”.

Chairman Dr Eric van Rongen explains: “New guidelines provide better and more detailed exposure guidance in particular for the higher frequency range, above 6 GHz, which is of importance to 5G and future technologies. 5G technologies will not be able to cause harm when these new guidelines are adhered to”.

Van Rongen, says the guidelines have taken seven years to develop after a thorough review of scientific literature, scientific workshops and a public consultation process.

As the row about rages there is no doubt the conspiracists are causing commercial, as well as physical, damage to 5G roll out plans. The internet has given them a forum untroubled by the absence of evidence and proof. This controversy has only just begun. The debate is going to get heated in more ways than one.